This is the first post on NCAR, the National Center for Atmospheric Research, designed by I. M. Pei in the mid-1960s, located on a mesa above Boulder, Colorado.

NCAR is probably Boulder, Colorado’s most well-known Modern building.  Perched alone atop a prominent mesa, the complex sits well above the surrounding town and suburbs and has as a backdrop the stunning flatirons and  peaks of the Front Range. (NCAR is part of UCAR, the University Corporation for Atmospheric Research, with buildings all over Boulder, but the building of interest here is I. M. Pei’s NCAR building at the top western end of Table Mesa Road.) 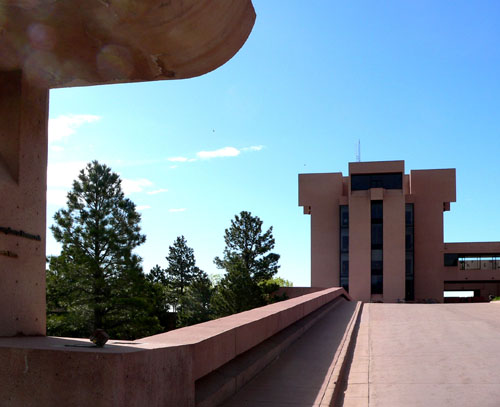 Along with being the motherload of geeky weather information, NCAR is one of the last purely Modernist buildings, a Brutalist design, that marked the end of the supremacy of Modernism as the only acceptable and official “style” of architecture for American corporate and government buildings.

Unlike the original design,  Pei designed a complex of similarly scaled and proportioned buildings, each providing space for different research groups of the institution and gathered in an intellectual community of shared courtyards.  By breaking the building down into smaller units, NCAR avoided the monumentality and thugishness of many of its Brutalist cousins.  The frankly, and intentionally maze-like design was meant to engender chance encounters between often-isolated researchers.

“You just cannot compete with the scale of the Rockies. So we tried to make a building that was without the conventional scale you get from recognizable floor heights – as in those monolithic structures that still survive fromt he cliff-dwelling Indians.”

I. M. Pei, from Paul Heyer’s American Architecture: Ideas and Ideologies in the Late Twentieth Century, (extracted from the Great Buildings Online website)

“I recalled the places I had seen with my mother when I was a little boy—the mountaintop Buddhist retreats. There in the Colorado mountains, I tried to listen to the silence again—just as my mother had taught me. The investigation of the place became a kind of religious experience for me.”

I. M. Pei, from Gero von Boehm’s Conversations with I. M. Pei: Light is the Key

Unlike most of its Brutalist cousins, this building does make some accommodations to its site and context.  The sources of inspiration that Pei mentions are certainly abstractly apparent, but it is the inclusion of local red sandstone aggregates to the bush-hammered concrete that most closely connects the building to the surrounding environment.

And at a distance, and it is hard to avoid a view of NCAR from almost anywhere in Boulder, the buildings certainly do sit with sensitivity on the mesa.  The scalelessness that Pei speaks about works very well in the view of the larger environment as the buildings, although quite large, are dwarfed by the neighboring flatirons.

I spent a couple of mornings and afternoons at NCAR recently, taking photos and spending time with a building that although I see it everyday, I have come to ignore as a piece of architecture.  I toured the building again, like I did ten years ago when we first moved to Boulder, and tried to understand its intentions and execution, its successes and failures.

Pei was the same age I am now when he designed this building and he often described it as his breakthrough design.  As has so often been said, architecture is an old man’s game, and Pei, like myself at 45 years old, could look back at some 20 – 25 years of buildings, drawings, thoughts and frustrations.  To synthesize this all in a single building is a fool’s errand, but an inevitable attempt for any architect.  After this building, Pei’s work shifted from largely developer-driven, single-structure works, to a more complex and subtle mingling of spatial intentions and object-like buildings.  It may be that only 20 years of fighting the Modernist battle between the desire to craft meaningful spaces and the love of frankly sculptural forms, can generate a building where these opposing forces can join and reinforce each other.

In a future post, I will post my impressions of the building, some more photos, and some thoughts on Pei, Brutalism, Modernism and the sources of inspiration.